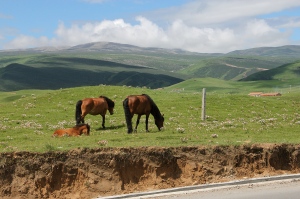 I felt happy for Nancy, shes getting stronger each day of ride. Our ride to Chaka was tough, almost as tough as my ride when i was riding the Tibetan Plateau. The first 2 hours of ride, we rode not so steep uphill but we rode against the wind, which slowed us down by a lot. We then took a 1/2 hr rest. Then from 3125m altitude, we climbed some 20km all the way up to 3820m altitude! This is the first mountain pass i climbed in Qinghai province, its more than 1000m altitude lower than the highest i climbed in tibet, but its still tough with bad dirt road and so many lorries along the climb to the pass. Suprising, Nancy didnt give up and she made it to the pass! She just kept going!

We took a 10 minutes rest at the pass, then rode down back to some 3100m altitude. We stopped in an unknown small town (i couldnt find it on the map) for dinner, and again, the owner is a muslim, and told me not to pay since im a muslim too. Oh man… hes so nice person. After dinner, it was already 6.45pm, we have another 40km to go if we want to reach the next town, Chaka. At first i was thinking, maybe we should just camp, since its getting darker soon and another 40km to go. Then it started to rain, and Nancy certainly doesnt want to camp in the rain. So we ended up riding along the rain for the next 40km. Was kinda tough, we were tired, riding under the rain and have to cover another 40km. 40km under the rain is kinda hard to cover, since we were all wet, its heavier to cycle! But we made it, we reached Chaka town at 9.15pm. It was already dark at that time. Nancy was okay, she was just cold but she never complain. And for the first time since i ride with Nancy, we covered 80km in 1 day, which is impressive for me.

Not so friendly Qinghai…

me and the Qinghai Lake

Qinghai Lake and the surrounding is great, but i realized the people here are not so kind and honest to foreigners. We had some bad experienced here in Qinghai. One of the worst thing happened was when we cycled along the Qinghai Lake. I was leading, with Nancy was about 30 meters behind me. Suddenly she stopped for toilet break. When she came out from the toilet, a middle 40’s Tibetan guy stopped her and asked for money. He said that is his toilet, and since Nancy used it, she needs to pay. I then told Nancy not to pay, and just ignore the guy. Reason we dont want to pay is because we got conned a day before, in Qinghai Lake too, so we got to be more careful to locals who tried to take advantage on tourists. The guy then asked Nancy to wash the toilet! Oh i was thinking maybe he has some bad intention, maybe he will try to rape her in the toilet or something.

Nancy and the Qinghai Lake

We were in the middle of nowhere, there were nobody except us. Nancy was so scared, and the guy blocked her bike, not wanting to let her go. At that situation, i got angry and the first time since im in china, i started shouting and threw some bad words right to his face, and about to burst. i looked directly at his eyes, and started to imagine me breaking his fingers and smash both his eyeballs. He even took out his handphone, look like wanna make a phone call. I was tempted to take his phone from his hand, and smash the phone on the floor. But i cant do the first move. I need a reason before I can shake him, I just waited for him to touch Nancy first before i can physically assault him. After some time, he finally backoff, and i told Nancy to go, while i wait there with the guy until Nancy was far enough. I felt sorry for Nancy, she was scared and the whole evening she lost her mood after the incident. 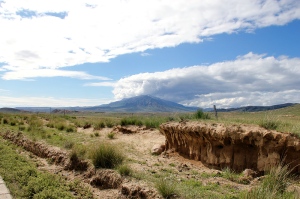 riding on dirt road, on the way to the mountain pass 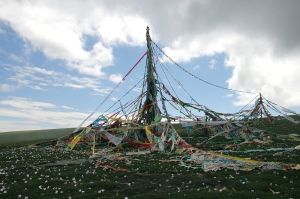 another view of the mountain pass

← Riding along the beautiful Qinghai Lake
Easy Ride to Wulan →