Near death experience… but a very good lesson for me!!

The ride from Porjus to Gallivare was easy. Its only 50km away and the road was kinda flat. The wind was blowing me forward and I reached Gallivare early without feeling much tired. In Gallivare, I was hosted by Anna, whom I knew from Lena, my host in Jokkmokk. She was kind enough to cook me delicious dinner and let me to sleep in a warm room for a night before I keep pressing north towards Kiruna. She has adopted a cute playful young boy from Vietnam and working as a nurse in Gallivare. She is maybe my last host in Sweden, as my ride in Sweden will end soon. Norwegian border is getting closer and soon I will cross into Norway. The next morning, I woke up around 8 and realized Anna has gone to work and sent her kids to school early. So I just took my time having my breakfast and prepared myself for a long ride towards Kiruna. I left Gallivare at around 9.30am and the road was good for the first 15km. 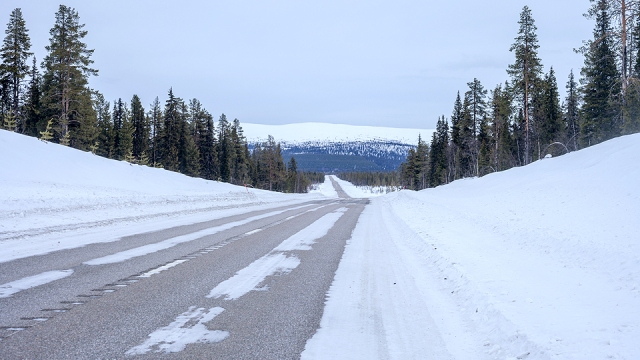 After an hour of cycling, the road turned north and the climb started for me. The headwind started to blow fiercely and I was slowed down a lot fighting the wind and the climb. I realized that the road here is much busier, there were so many trucks passing by here. I guess most of these trucks are going to northern Norway and they chose the Swedish roads because theyre straighter compared to the Norwegian roads which snakes along the fjords. I was going slow with many climbs and headwind but steady without much rest. I realized that the day is getting longer now. So I kept pedalling until I finally reach the junction where I have to decide which route to take. Its been long that I tried to decide whether I should keep pressing north until Nordkapp (the most northern part of the Scandinavia peninsula) or finally turn northwest into Kiruna and the fjords of Norway. I actually stopped right at the junction for some 10 minutes to decide my next route. Getting to Nordkapp, I can brag about it that I have reached the most northern part of Europe, where there is nothing between me and the northpole except for Svalbard islands. But the road west towards Kiruna is exciting, plus getting to the fjords of Norway is another long dream of mine. So after few minutes of deciding, automatically my hand turned the handlebar to the left and my legs started pedalling again. I took the road northwest towards Kiruna!!!… and cycled for another 10km or so before I find a place to camp. 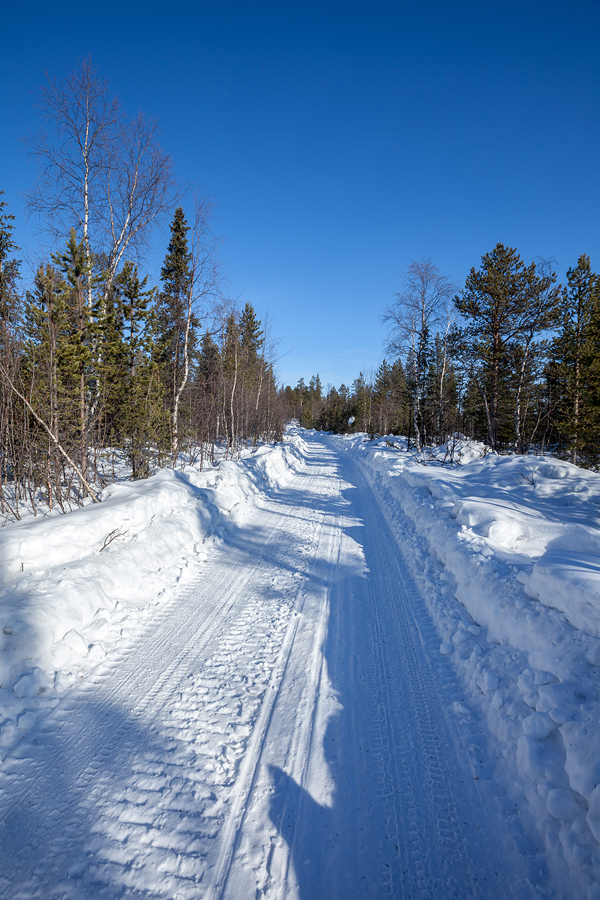 As usual, I scouted for a few minutes looking for a good place to camp. Usually I will camp in the forest, but that evening, I feel like camping near the frozen river, just to have a different view. So I went quite deep inside the woods, far from the road, to a very quiet place near a frozen river. From where I put my bicycle, I walked about 100 meters towards the river. Getting nearer and nearer the river, the snow was getting deeper and deeper. There is no way I can camp on very thick snow, so I turned back. Then I realized that I accidentally left my gloves near the river and when I turned back, the gloves fell into the thin ice in the half frozen river. I knew that it was dangerous to get there, I should have cut some tree branches and use it as a chopstick to get my gloves back instead of walking through the thin ice. But as usual, Im a clumsy guy, I just want to get things done. Hehe… I then walked towards the river and just about 2 meters away for me to reach my gloves, I stepped on a very thin ice. I could hear the ice broke and I fell into cold, very very cold water underneath the ice layer. I was surprised it was deep, I fell almost to my shoulder and I was struggling to get back on top. It was too cold and my legs were cramped only in seconds. Only my upper body still working. I tried to push myself up, but when I put my hand on the ice layer to push myself up, the ice broke and again I fell inside. Even when I put my  hand on the snow, it was too soft. There is no one there, I was alone in the wild, very quiet place, impossible for the people to help me out.

the half frozen river that I fell into. Looks beautiful yet deadly. Once u go in, theres no way out darling :)

But the good thing was, I wasn’t so panicked. I was panicked only for a split second when I fell into the ice but while I was struggling to get on top, I was actually telling myself, “Wow, macam dalam movie siot” and instead of panicking, I imagined Jaguar Paw inside the movie Apocalypto when he fell inside the quicksand hehehe. After a few seconds of struggling, I finally got back on top and feeling so relieved that I was still alive, I just lied down on the snow looking at the sunset while taking deep breaths, ignoring the cold for a few seconds. I was wet all over, luckily it wasn’t so cold. The thermometer reads only at -6 celcius so I think I will survive the night. I then quickly pitch my tent nearby, make fire and dry all my clothes near the fire. The temperature dropped to the lowest at -13c that night and I was really hoping that it wont drop further below -20c or I might suffer for the whole night. I couldn’t sleep much that night thinking of the incident, I would have died there inside the river. The next morning I woke up early and had a quick breakfast before riding another 40km towards Kiruna. I really need to get indoor again and wash and dry all my clothes. I realized not only the day is getting longer, but its getting warmer now. The sun is shining proudly everyday now and the temperature is always between 0c to -8c during daytime, which is really good. Only at night is still quite cold but rarely reach below -20c anymore. Spring is really coming in this part of the world it seems. Only after 3 hours of easy climb, I finally reached Kiruna and for the first time, I paid the full price to get to a hostel here since I was in Sweden hehe. I will take a good day rest here in Kiruna since this is my last town in Sweden before I cross into the Norwegian border very soon. Now, I will really enjoy the good shining sun and warmer air here. Spring is really coming!! :)

← Exploring deeper inside the Arctic Region
Recovering in Kiruna →

6 Comments on “Near death experience… but a very good lesson for me!!”