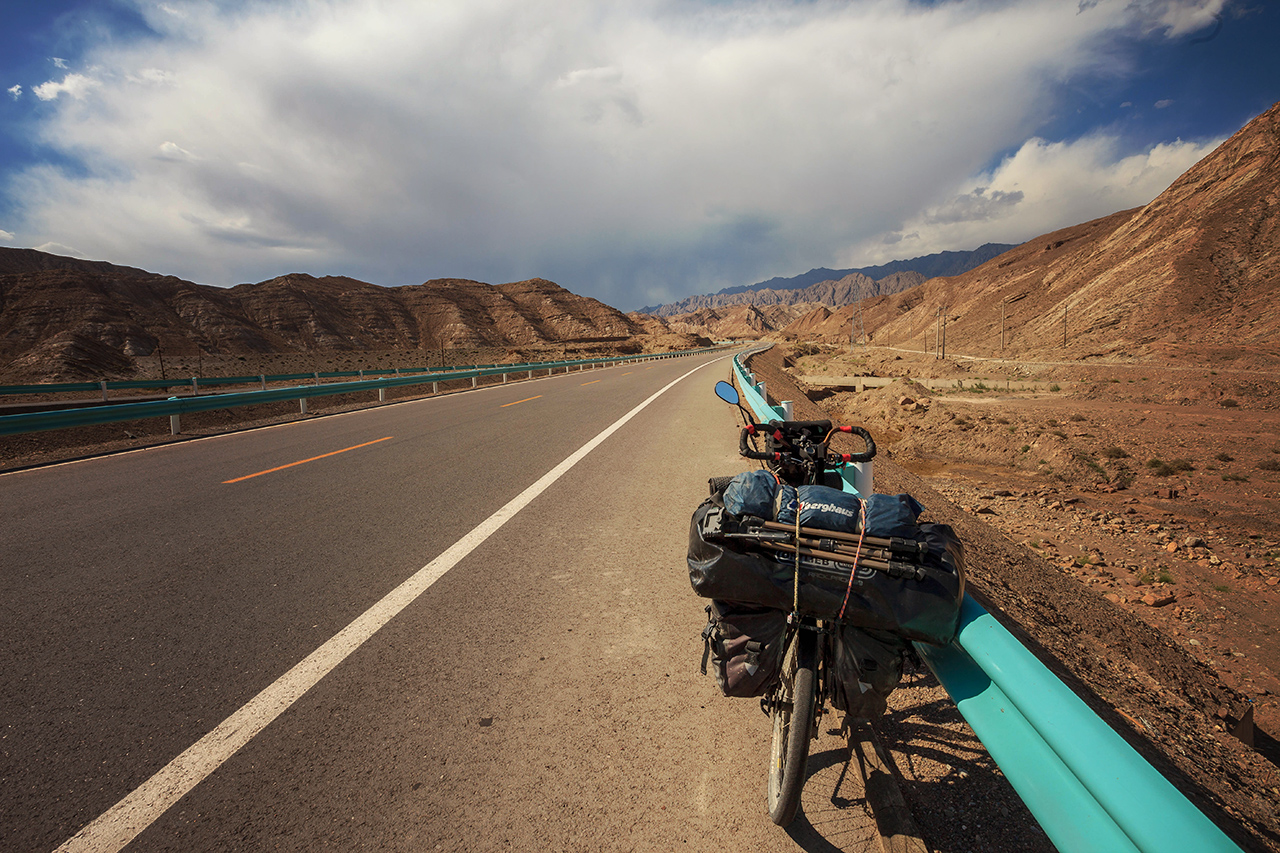 After the beautiful ride in the Karakoram Highway, I stayed another few more days in Kashgar. The Spanish cyclist has left the day after. The food in Kashgar is really addictive. It slows me down. I’ve tasted the best plov made by the Uighurs. I also had the best ice cream, fresh yogurt drink and shashilik also here in Kashgar. I waited in Kashgar until Sunday, so that I could fast on the first day of Ramadhan. Fasting here is so much different than in Malaysia. Daytime is closed to 20 hours and the temperature is almost reaching to 50c, making me to just stay inside my hostel, inactive. 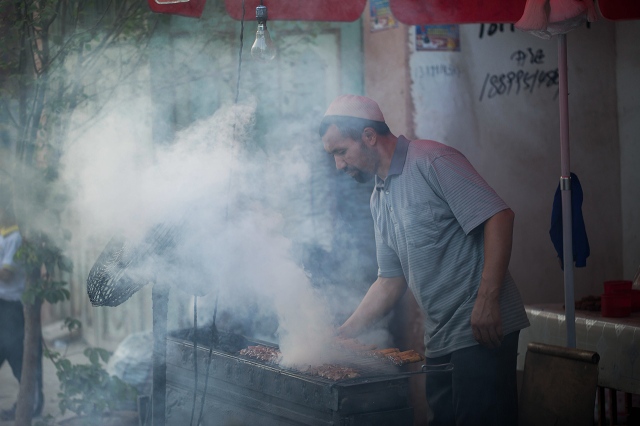 the best shashilik just in front of my hostel!

The next day, I had an early breakfast, changed some Chinese yuan to Kyrgyz som and left Kashgar around 9ish. The sun seems to be so impatient, it gets hot even as early as 9am. The 240km ride from Kashgar towards the Kyrgyz border was hell. I saw no clouds in the blue sky. There was nothing between the sun and me. It was really hot and I finished all 5 bottles of water after less than 50km of cycling. The next available town, Ulugat is about 100km away from Kashgar. Reaching Ulugat seems forever. At one point, I was about to faint, totally lost control of myself since it was way too hot. Cycling and puffing, while fighting the headwind under some 50c is not an easy task. Physical strength won’t help in this condition. Everything lies only in the mind. When I reached Ulugat, I was invited by a Kyrgyz man on a motorcycle to have dinner together. After a good dinner, I cycled another 20km offroad through mountains before pitching my tent. It was difficult, I had to push my bicycle a few times when there was no way I could cycle in the mountains. I then stopped cycling and decided to pitch my tent and call it a day when the wind started to blow fiercely. Fighting the wind isn’t a good idea, it consumed too much of my energy. 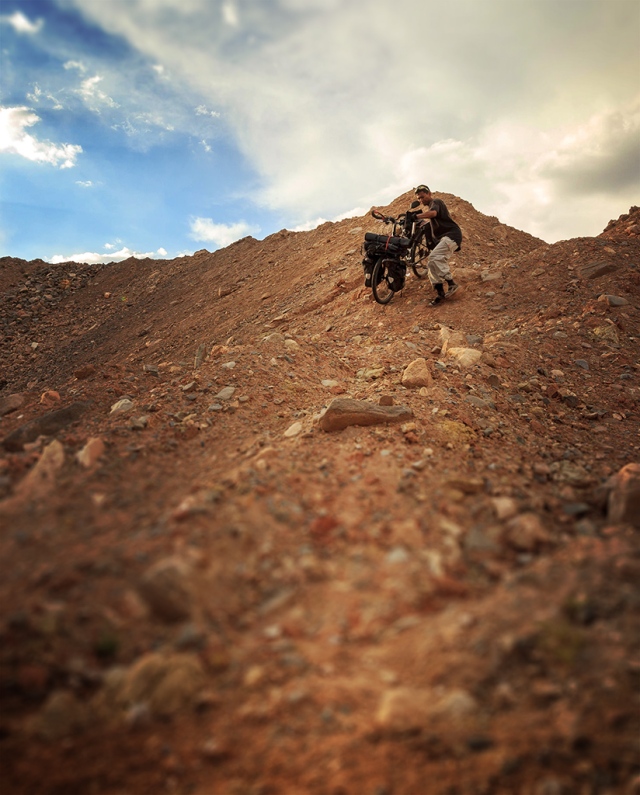 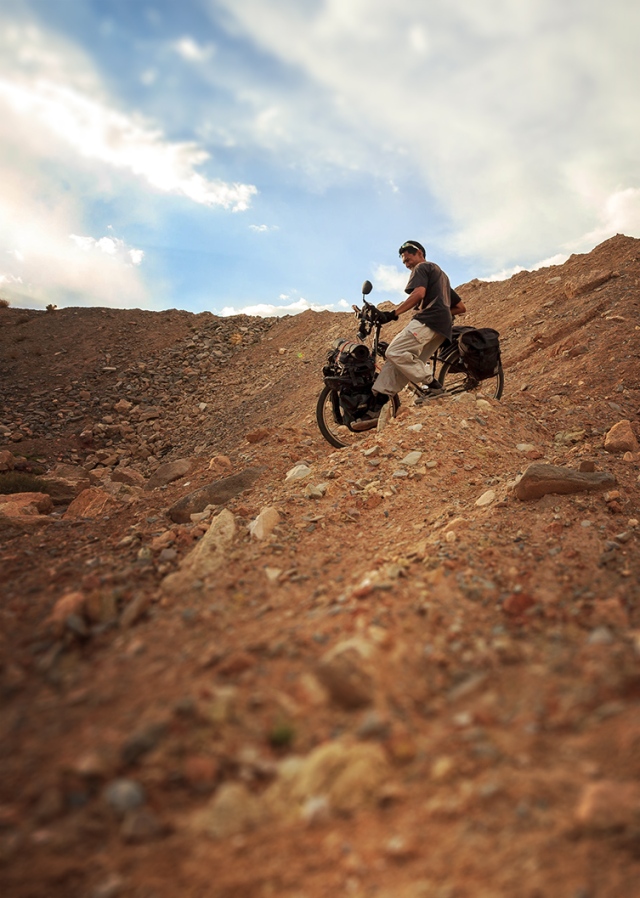 hard time in the Pamir 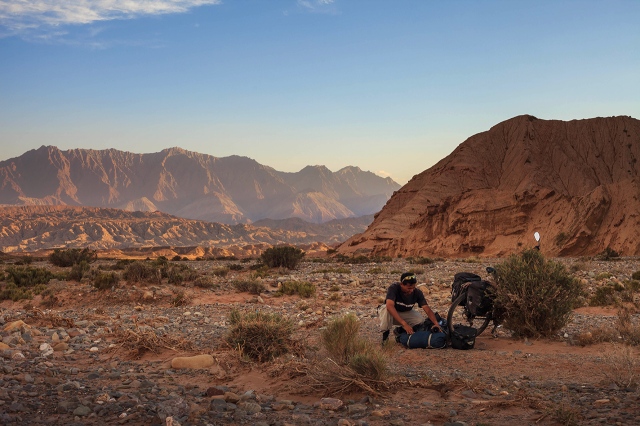 preparing to camp in the wild mountains

I slept well after I had a good instant noodle and hot milk while watching the beautiful colours of sunset. But my sleep didn’t last long. I woke up in the middle of the night around 2am and heard a pack of wolves howling. From the sound of it, they must be very near, anywhere within 100 meter range from my tent. This isn’t the first time and I’m used to it, but still, my heart always beats faster whenever I heard the sound of wolves in the mountains. They don’t usually attack humans, except in movies. But somehow, their howling sparks the fear to grow inside me. After they were gone, I slowly and quietly unzipped my tent to check the surroundings. Again I was amazed when I realized I was in no darkness, but the milky way was so bright in the sky and my eyes were wide open watching it. I decided to stay up for a few minutes gazing the bright night sky, watching the milky way and countless shooting stars in the sky before going to sleep again. 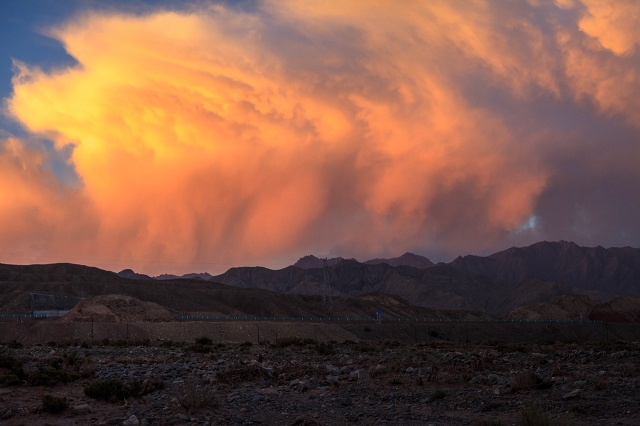 beautiful colours of the clouds during sunset 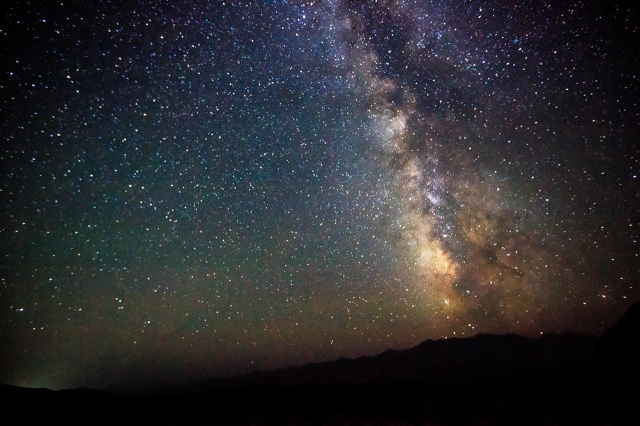 The next day I cycled the remaining 100km towards Irkeshtam Pass, the border crossing of China-Kyrgyzstan. Getting nearer the Kyrgyz border, I realized the climb was much harder. I took many stops in between, more often when I was near the border since the climb was getting steeper… the altitude was getting higher… and the air was getting thinner. The climb made me feel older… weaker. I reached the border gate 2 hours before it closed, the timing was just right. But reaching the border gate, I received a bad news. The guards told me that they don’t stamp the passport here at the border, but it must be stamped 120km away, in Ulugat, the town that I already passed the day before. At some point, I got angry and questioning them on what kind of system is this. I have been in so many border crossing before in my life and this is the most ridiculous. All border crossing that I have passed before, they will stamp it at the border. Plus, this is my 3rd border crossing in China alone! My first China crossing was from Yili, China to Korgas in Kazakhstan and second was Zamyn Uud, Mongolia to Erenhot, China. All these crossings, my passport was stamped at the border. 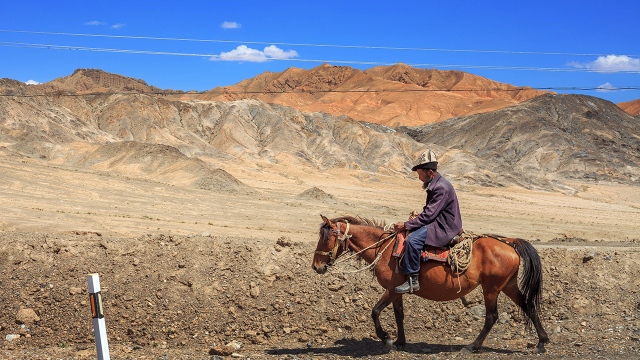 Kyrgyz horseman at the end of China, some 20km from the Kyrgyz border

To make it worst, they don’t let me to cycle back to Ulugat to get my passport stamped. They don’t even let me to hitchhike, but I had to take a taxi back to Ulugat and pay 400 yuan for it! I then realized that they made this system probably to make money out foreigners. It is not my fault, I passed by Ulugat the day before and I didn’t see any checkpoint that they will stamp my passport. So I had no other choice but to pay 400 yuan back to Ulugat. Luckily, while I was on the way, the driver, who is an Uighur man, pity me and told me to pay him only half. I was relieved by his kindness but I still feel that I was robbed by the system. Another worst case, when I reached Ulugat, I learned that the hostels there don’t accept foreigners. Foreigners can only stay in hotels and theyre expensive. Again, feeling that I was robbed by the system, I had to spend a lot of money in an expensive hotel which I don’t need to. The next day, after get my passport stamped in Ulugat, I paid another 100 yuan and get back to Irkeshtam Pass by a shared taxi. 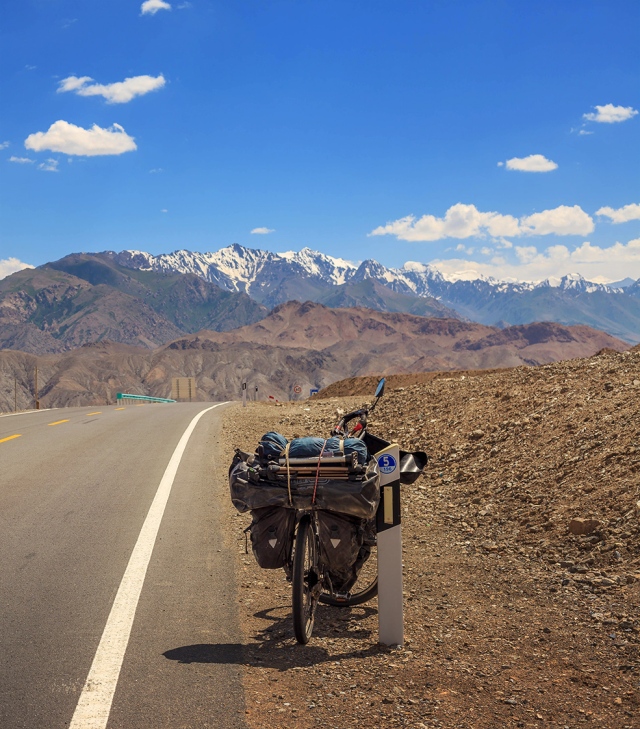 near the border, those snow mountains in front belong to the Kyrgyz

After all the hassles, I finally managed to leave China and they let me to cycle the 3km of no-man’s land between China-Kyrgyzstan before getting into the Kyrgyz border checkpoint. On the Kyrgyz side, it took me less than 5 minutes before I get my passport stamped. I felt so tired and decided to stay in a small village just after the border post on the Kyrgyz side. After some time scouting for a cheap place, I finally settled for the night with a young Kyrgyz family with a very good price, including 2 meals for dinner and a good breakfast for only 300 som, roughly 20 Malaysian Ringgit. 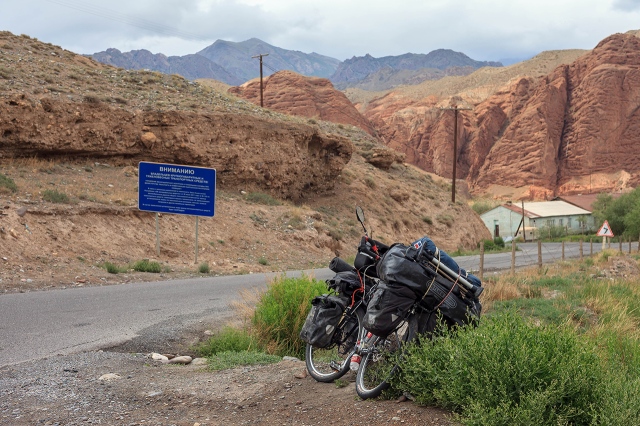 the 3km of no-man’s land between China and Kyrgyzstan 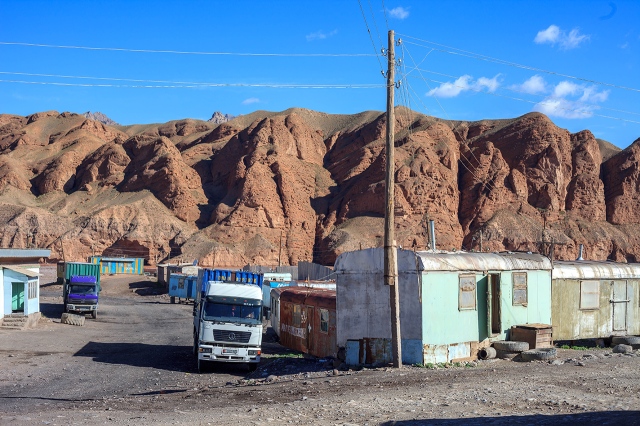 the place where I slept on the first night in Kyrgyzstan 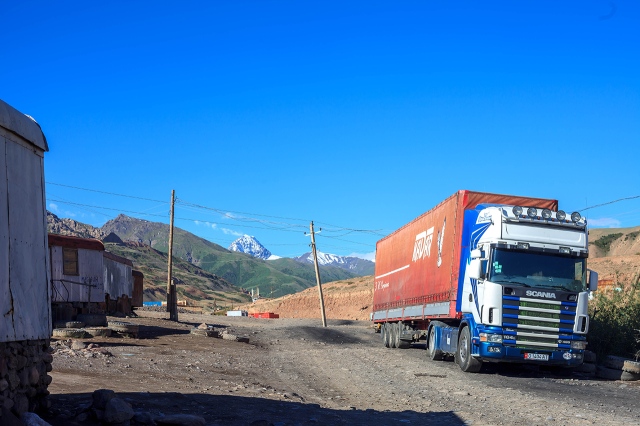 Irkeshtam pass on the Kyrgyz side

← A Ride in the world’s most scenic mountain road, The Karakoram Highway
Problems and Solutions that the road provides… →

8 Comments on “Crossing Into Kyrgyzstan”