From The Kyrgyz Mountains To The Finnish Lapland

Living in the countryside of Kyrgyzstan gives me some kind of special energy. Being able to stare at the sun on every sunrise and sunset and breath the cold fresh air in the high mountains makes me stronger… both the mind and body. The nature somehow nourishes the soul and the physical body, just like how the sun nourishes the trees with its magical light. After months enjoying the colours of autumn here, the first snow finally fell on earth and covered the land in white on early November. The winter is finally here again. Temperature dropped quickly…freezes everything in only few days. Its scary to look at the thermometer especially at night, sometimes temperature dropped even at -26c especially early morning on the eastern side of the Tien Shan. My normal 3 season hiking shoes doesn’t work anymore in the mountainside. I tried to climb even some small mountains but failed. Everytime I climb a step… I will fall 3 steps down. Its time to get my mountain boot and crampons to work… and to protect my feet from being frozen. 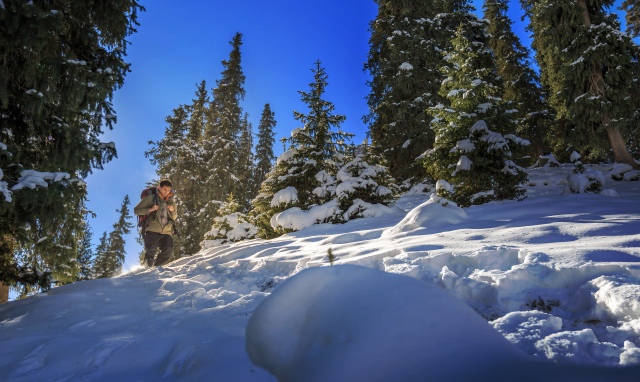 I tried to keep exploring the mountains on my bicycle but at some point, I realized that it was a bad idea. I looked like a clown riding my fully loaded bicycle trying to get higher in the mountains that are fully covered with thick soft snow powder… except that I was on my winter clothes instead of a clown costume. After days of thinking on how do I pursue my journey during the winter season, I finally came out with the idea of using cross country ski and snowshoe to explore deeper in the Kyrgyz mountains. After I did some research on the Internet, I was confident that its a good idea to combine cross country skiing and snowshoeing to explore the high mountains on the winter season. Only problem is, I never done cross country skiing before. I tried alpine skiing twice before but its something totally different. Skiing while pulling heavy luggage is something even more difficult, especially when you are not used to even normal skiing. So my first step was to prepare my body for it. I keep my bicycle in the balcony and start running in the mountains everyday to keep myself fit… well… at least. 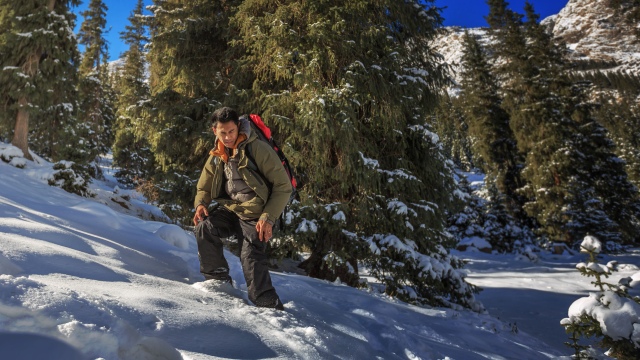 the Tien Shan mountains are now my everyday playground

While travelling on the southern part of Issykul Lake, I stayed a while in a small village called Bokunbaeva, to meet a Kyrgyz hunter who hunts wolves and foxes using his eagle. Its a tradition in Central Asia that people hunts using eagles especially in Mongolia, Kazakhstan and Kyrgyzstan. Here in Kyrgyzstan, it seems that this man is a star and well known among the Kyrgyz eagle hunters due to his experience. Upon reaching his house near the mountains, I was being stared by 2 fierce looking eagles once I walked through the front door. I was introduced to both eagles and the most deadliest is surprising the smaller one, named Tumara, weight just about 12kg and when she spread her wings, its about 2 meters wide, just like those NBA basketball players. The other eagle is bigger and weight about 16kg, but slower and less aggressive. Tumara is slightly smaller but very deadly, she bites much faster than a cobra, she can dive from the sky towards her prey as fast as 240km/hour, she can carry a small sheep on flight and can kill a big size wolf in only a single attack… making her the most deadliest creature in the Tien Shan mountains! It was a good visit and I plan to come again on deep winter to travel together with the hunter for a few days in the mountains and film the hunter and the eagle in action. 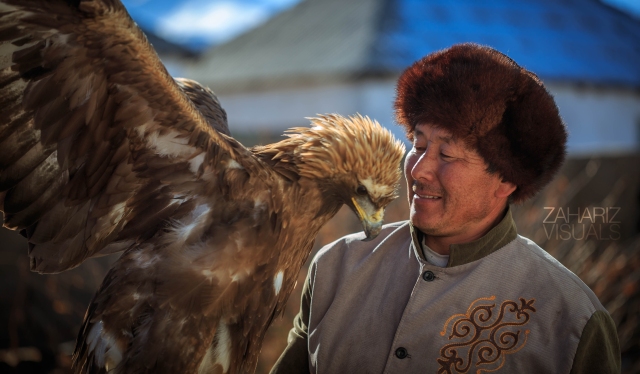 The Kyrgyz hunter and his deadliest eagle, Tumara

A week later I came back to the civilization, walking in the street of Bishkek surrounded by almost a million of people. I then felt relief when I discovered that the flight is so cheap to Europe… another advantage for me to have a base here in Kyrgyzstan. Taking a one way flight from Bishkek to Istanbul is cheaper than taking the bus from Xian to Urumqi when I was in China few months ago. I then made some research on the Internet, contacting a few people in Europe trying to get more information about cross country skiing. At first I plan to get to the Swiss mountain to learn skiing from the Swiss mountaineers until I came across a good documentary on youtube about the winter war between Finland and Russia during the World War. I was amazed to see how the small number of Finnish soldiers defended their soil against the massive Russian army, coming to Finland with their huge tanks and other heavy artillery. The Finns were outnumbered but they destroyed the whole Russian army and its heavy artillery by moving fast through the forest just by using their skis. They must be really good at skiing in the forest then. I then decided to go to Finland and started to contact a few people in Finland. I finally crossed path with a Finnish couple (Heidi & Petri) who are adventurers and just about to form a company doing travel and adventure guide around the Lapland region (www.adventureapes.fi). After some long conversation over Facebook and a few email exchange, I then booked my ticket and on the end of November, I flew to Sweden from Kyrgyzstan. 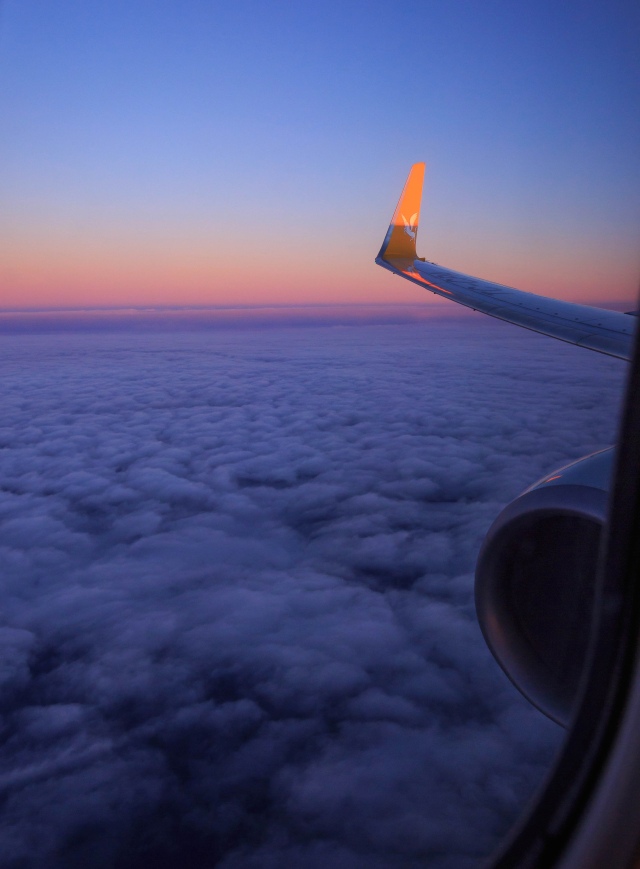 crossing into the Arctic for the second time

As usual, I dont plan when doing any kind of journey or expedition. I will just go and surprise myself everyday. Well, thats how I live my life anyway. So its the same case with this journey. Once I reached Arlanda airport, I have no clue how to get Finland. I just walked calmly to the information counter in the airport trying my best to look like a lost dumb tourist. And the journey begins right after I walked away from the information counter with all the information I need. I got into a bus, then found myself walking carrying my heavy bags in the busy street of Stockholm, got into the wrong train, then another train, then a long walk through the coast at night, found myself in front of a ticket counter in a ferry terminal and finally in a small room inside an overnight ferry from Stockholm, Sweden to Turku, Finland. After a good 8 hours of deep sleep inside the small cabin, I woke up fresh, had a nice warm shower, a good breakfast and waited another hour before the ferry landed in Turku, my first point in Finland. I took another few hours of bus ride before I finally arrived in Tampere, where I finally met my Finnish wilderness guide, Heidi and Petri.

15 Comments on “From The Kyrgyz Mountains To The Finnish Lapland”