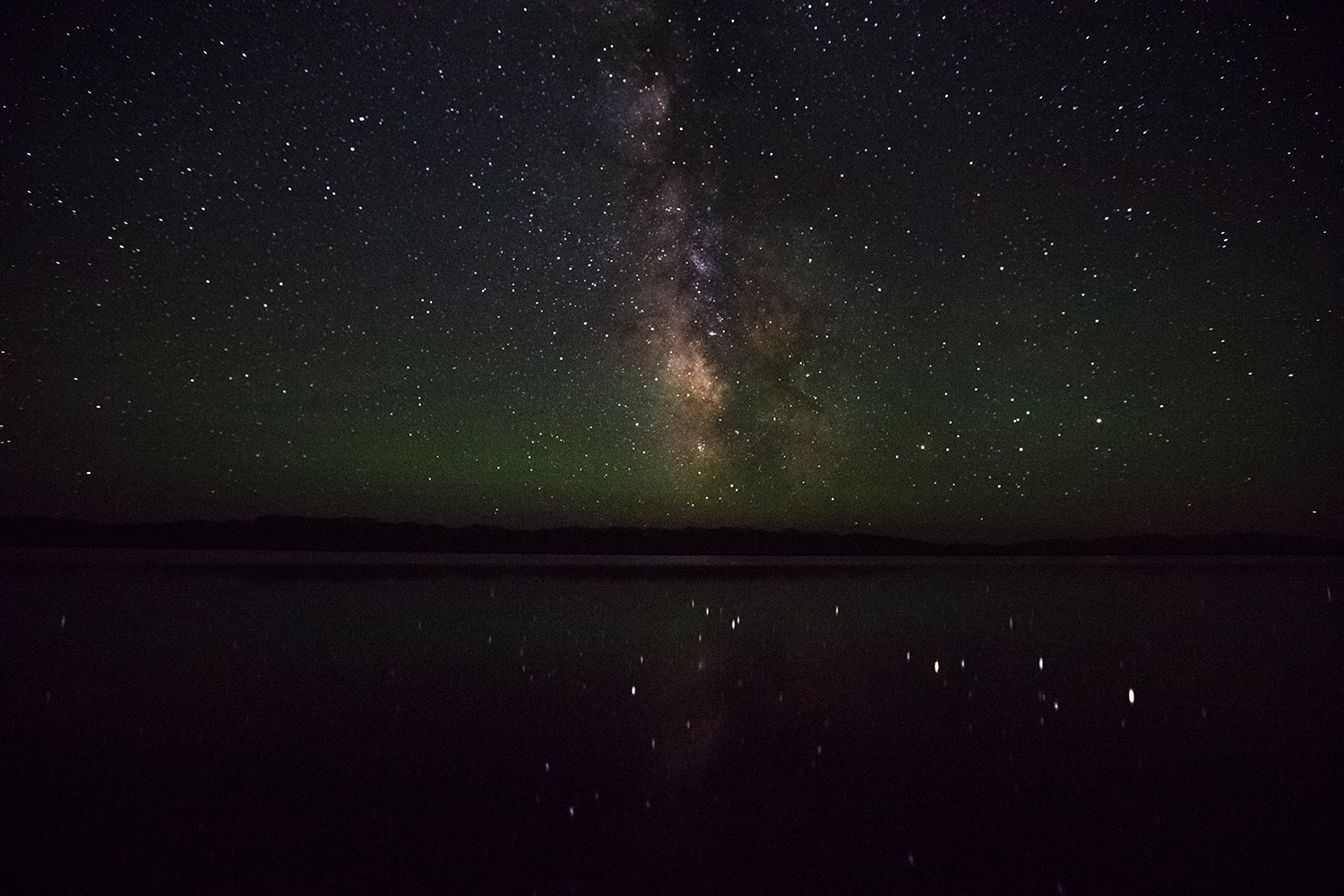 I have no problem crossing big rivers, rocky mountains and steep valleys with my new mountain horses that I exchanged with the sherperds a few days ago. My horses now seem confident taking each of their steps in the wild path through the harsh condition in the Naryn mountains. The wild mountains here in Naryn is just like their playground.. just like us walking in a shopping mall. The mountain horse I’m riding is wearing no horse shoes, it seems that he doesnt need one. It was difficult to ride the mountain horse at first, difficult to control as it is wild but after a day I started to build a healthy relationship with my new mountain horse. The horse tried to runaway from me while I was drinking the water from the river on the first day of ride. But after a while, the horse is used to me… used to my smell, used to my voice and my emotion. Us strangers have become friends… a travel companion… we are now in a same team.

the wild mountain horse has now become a friend

But the road is filled with lessons, lessons that need to be learned. Once a problem is solved, another one appears… that is life. Once I descended from the mountains, I rode through graveyards, farming areas and finally a paved road. I was heading south and after asking some local farmers, it seems that I have no other choice but to ride along the paved roads for some 40km. There is no other way, the lonely paved road is surrounded by steep… almost 90 degrees huge rocky mountains, impossible for my horses to pass. So I have to ride along the road for a few hours to cover the 40km distance and my horses were so nervous whenever lorries and trailers were passing by fast. The road is actually connecting China and Kyrgyzstan, it runs from Bishkek to the north all the way to Torugart Pass to the south, connecting into Urumqi of China. So the traffic is filled with trucks and trailers sending goods between China and Kyrgyzstan. My horses however, are wild mountain horses, they’re used to mountainous condition but not used to see trucks and trailers, which probably look like angel of death to them. Whenever trucks or trailers passing by, my mountain horse will run aimlessly… afraid. It was dangerous and challenging. Whenever I see incoming trucks or trailers, I have to hold their hair tight and stop them from running away since it was very dangerous. Sometimes I saw a path in the mountains along the road but when I rode through the path, it gets me nowhere, so I had to turn back to the paved road. At this point of my ride, I started to miss my bicycle. At least with my bicycle I can just cruise fast along the road. But with horses, I feel sorry for them, I kept on whispering to my horses telling them everything is going to be fine.

local kids along the way

After hours of battling against the heat on the paved road, I finally reached a grassland, green grass which looks delicious to my horses. I let my horses to take a break and feast on the fresh grass before continuing further, looking for a river since Im out of water. After about an hour letting my horses to rest, I continued further through a narrow valley, then an open grassland, then a beautiful mountain areas with river flowing beneath it. The sun was about 3 fingers away from the horizon, roughly another 45 minutes before sunset so I decided to pitch my tent and put my horses to rest. As usual I did my routine, washing cooking etc before the sky slowly turns dark, before the sun slowly dim its light, giving ways to the distant stars to glow and reveal their beauty in the dark mysterious sky. I slept early, it was calm… the only sound I heard was the flowing river and my horses chewing the grass just outside my tent. 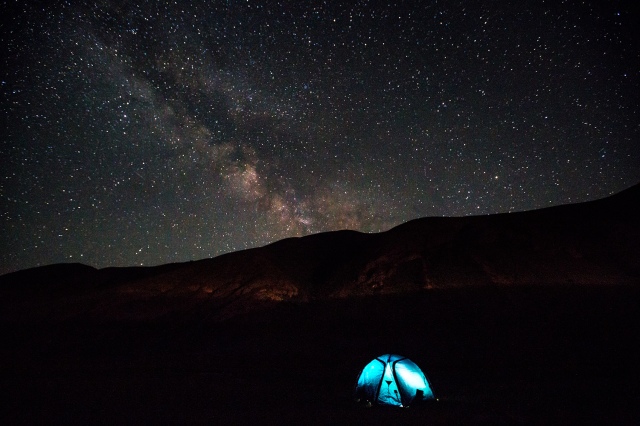 my lonely home under the heaven

I woke up in the middle of the night by the sound of my horses. It was a normal thing so I tried to get back to sleep. But then my horses kept whining in a strange way, suggesting me that something is not right. I tried to concentrate, letting my soul to attach firmly to my physical body slowly, trying to get my mind back to this realm of space and time from the realm of my dream. I put on the headlight on my forehead and went out from my tent to check if everything is okay with my horses. They stopped whining and became calm once they saw me. I looked around to check the surroundings. When my headlight is aimed across the river, I saw a few pair of eyes, glowing and mysterious in the dark, moving randomly… telling me that something is out there in the wild trying to cross the river. The flowing water from the river produced too much noise, I couldnt hear any howling to confirm whether those mysterious eyes were wolves or female horses. My horses can become nervous from 2 things, wolves and female horses. They can become crazy and start running wildly when they came across these 2 creatures. But by judging on where I was at that time, I was pretty sure they might be wolves, since Im far in the wild. I then quickly cut some tree branches, gathered some tree bark, dead leaves and dry grass to make a quick fire right near my horses to scare away the wolves. I then sit inside my tent, letting a small opening to my tent so that only one wolf can enter at a time so that I can kill them in case they would go for me instead of my horses.

A Kyrgyz mountain man, lord of the taigans

After a few minutes of waiting, nothing happened. My heart started to beat fast since waiting is usually far worst than the real event itself. My mind is telling me that the wolves are planning their strategy for an ambush, so the silence made me even more nervous. Suddenly my horses were screaming again. I held my knife firmly on my left hand and my right hand is holding the horse saddle as a shield. I crouched lower, getting into position to pounce, which is the best position for both attack and defense in a fight. But I didnt hear any sound of wolves, instead, I heard a sound of horseman riding towards the river and I felt so relieved when I heard the sound of barking dogs. The sound is familiar, it is not normal dog, but it was the sound of Taigans, a type of dog found in Kyrgyz mountain who doesnt fear the wolves. Instead, Taigans are used by Kyrgyz hunters to kill wolves…. very brave dogs. I quickly went out from my tent, I saw a man on a mountain horse together with his few Taigans guarding him, riding slowly towards me under the dim moonlight and the milky way. He then greeted me by saying Salam Aleikum, which means peace be upon you in Arabic. He said that he live in a yurt nearby, he saw me in the evening pitching my tent but never want to bother me. He was watching me if Im ever in danger sleeping near his territorry and realized that I was in danger from the fire I made. Wolves attack is a normal thing, he said to me. They dont go for humans, they usually come after the sheep, so dont be so nervous. He then let the Taigans to roam around my camping area to guard me and my horses for the rest of the night. I looked up at the stars, giving thanks to the Creator for sending this man and his taigans to guard me. Looking at the sky, I saw the stars, the planet and all the universe… it was a beautiful night. The man then came to visit me again after the sunrise with his donkey, taking his son with him, feeding me with bread and kymyz. A saviour sent by the Almighty…

the road into Songkol lake

I continued my journey climbing into higher altitude, crossing a mountain pass… then another. After the second mountain pass, I saw a beautiful view, a wide world… filled with mountains and a lake from afar. I smiled, I finally saw my destination from afar after weeks and weeks of tough ride. Its Songkol lake, a beautiful mountain lake sitting above 3000m altitude. I kept riding, the lake seems bigger and bigger when I rode towards it. The mountains surrounding it seems higher and higher. I finally reached the shore of the lake, there were many yurts, owned by local people here who live here all summer hosting tourists, both local and foreign. They greeted me with smiles on their faces, wondering where I came from. My dark burnt skin made them think that Im a local Kyrgyz man from the countryside but the shape of my face looks foreign to them. Telling them that Im from Malaysia made them excited, as they dont really meet Malaysian people so often. One of them told me that there was a Malaysian a year ago came to this place. I just smiled, they forgot my face. It was me, as I came to this place not by horses but with my friend a year ago. They were amazed that I came all the way from Karakol pulling 2 horses alone for weeks and weeks. Theyre Kyrgyz, theyre horselords so they know well things that I have went through. They then took care of my horses, feed me with meat, bread, rice, tea and kymyz until I cant eat anymore. They took care of me like Im one of their own, like Im a Kyrgyz man myself. 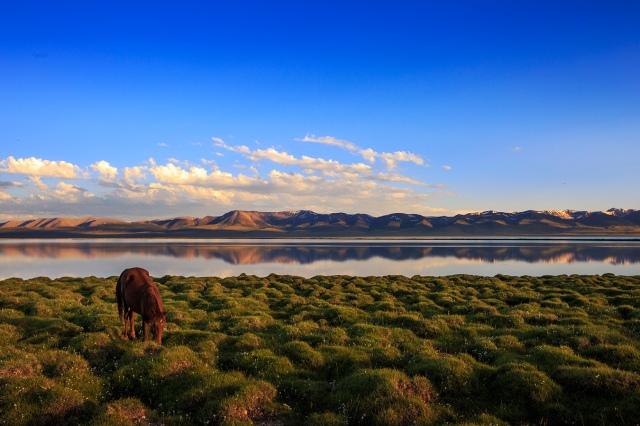 finally, I managed to put my horses in good grass and managed to enjoy the beautiful view of Songkol

← Morning Routine: Packing The Horses
A Day With The Mountain Horses →

There was an error retrieving images from Instagram. An attempt will be remade in a few minutes.