Tian Shan wasnt so gentle to me :(

Climbing climbing climbing! I guess thats the best word i can describe my ride to the peak. Tian Shan was very harsh to me :( Both me and pascal stopped many times from this tough climb. The climb to the peak was the hardest for us. Road was mostly gravels, steep climb and the temperature was below zero! Took us 8 hours to get to the peak! It was a killer climb! We started at some 3000m altitude, climbed all the way to 4280m altitute to the peak. We passed by a beautiful but dangerous glacier. Many people along our way warned us not to pass the glacier and suggested us to take bus instead to go through the mountain. The problem with me is, im a stubborn guy. When people said its impossible to do something, usually i will end up doing it. So it was the same case with this climb. When we were half way to the top, some chinese tourists were impressed that we were actually climbing to the top, and stopped to snap some photos with us.

dare to climb this with some 30kg luggage? Its a killer climb!!

It was weird today. At first it was sunny, then the evil looking clouds started coming in. It is the end of summer now but it was snowing! It was actually a heavy snowstorm when we were climbing, which makes it harder to climb to the top. We were freezing at about -5 celcius. We didnt expect this and Pascal was wearing short pants haha. Pascal was so afraid at 1 point and said this snowstorm could be very dangerous but i calmed him down. We rode to the top successfully anyway. It was around 6 pm when we reached the top but we didnt stay long, since it was way too cold for the both of us. After done snapping photos with some other chinese tourists at the top, we quickly rode down.

some unknown town, they have a guesthouse here so i slept here for a night

I expected the ride down would be marvelous but the first 15 minutes was horrible! My hand were freezing i actually thought i caught a frostbite on my fingers. It was so painful, didnt know what to do but to continue the ride down from the peak since i need to get to the lower altitude fast. I never felt this kind of pain my whole life. After about 1/2 hour riding down, i managed to get as low as 3400m altitude and the pain was gone, the ride became marvelous. The sunlight and the blue sky finally appeared again and i felt warmed again. The ride was really good, i went fast from 4280m altitude down to some 2000m altitude in around 2 hours. Passed by so many beautiful views of mountains and small kazakh villages under the blue sky and the beautiful sunset. I finally stopped at a small unknown town (never exist on my chinese map) and waited for Pascal, then stayed a night here. We were the only tourists here, most people who stayed here are lorry drivers so the locals here were very curious at us. 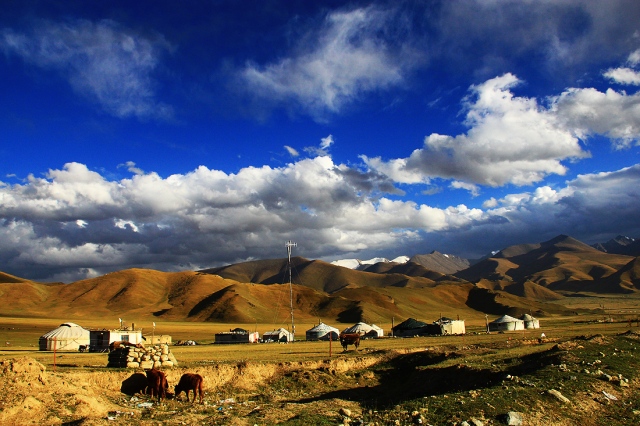 Nancy, if ure reading this, im sorry i couldnt reply ur sms. My phone is barred again, weird, i rarely use it. Just to let u know im doing well here and will enter Kazakhstan from Korgas. U should have joined me, riding along the beautiful Tian Shan mountains now all the way to the border. But it is so cold up here yaiks! Hope ure doing well in Guangzhou, but dont dwell too long in the city. Your place is here on the mountains and u should be with us cyclists :) Hope u will be back on the road someday…

it was snowing n pascal was wearing short pants haha 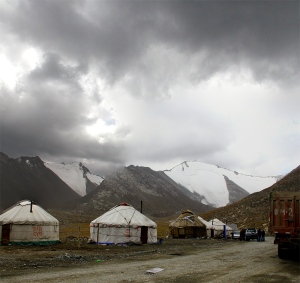 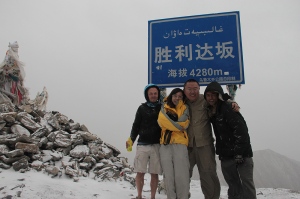 at the top of the mountain pass 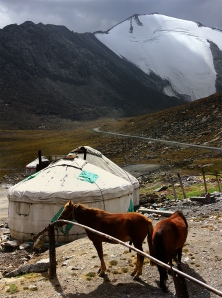 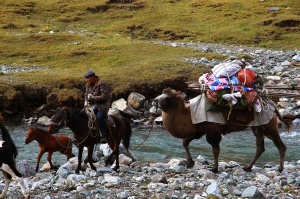 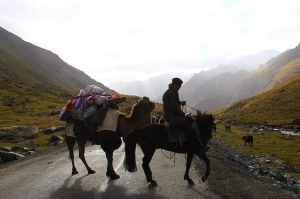 ← To the border!! Back on the road again :)
A Taste of Communism? Hate those police!! →

6 Comments on “Tian Shan wasnt so gentle to me :(”