Along The Snaefellsnes Peninsula

I took a day rest in Borganes after struggling pulling my heavy bicycle. Its a small town with only around 1000 population. Nothing much to do during a rest day except charging my laptop, phone, cameras all to full bar. And of course, slept in a proper bed and enjoyed a very nice long hot shower :) The weather here is very unpredictable, when i was in my room it was clear blue sky. Few minutes later when i took my camera and went out to the hill, it was cloudy. So i just walked around exploring the small town. Did some small shopping on groceries in a supermarket here.

At around 10.30 at night, I put on my thick jacket, carried all my cameras and climbed the hill to witness the Midnight Sun. It was very windy and I was shivering even with my jacket. I really need more jacket when Im riding in Norway during winter. This is only summer, and the temperature is already down to between 0-5 celcius at night with the wind at night. I finally found a nice spot to witness the phenomena and waited for hours to capture the magical sun. Finally at midnight, the sun touched the horizon for a while and began to rise again. The colors, the reflection from the North Atlantic Sea, the quietness, the feelings I had during that moment was simply… sexyy!!! It was really magic to witness the sunset, then sunrise a few minutes later. I really feel like Im traveling in some other planet, far away from Earth…

the view of Borganes town from the hill

the magical Midnight Sun! The color is sexy isnt it?

The next day while I was busy packing and getting ready to ride more to the west of Iceland, I found 2 bicycle outside the guesthouse, with German flags. I waited there to find out the riders. One guy came out and I asked which direction theyre going. They told me that theyre going west as well towards the Snaefellsnes peninsula, exactly the same direction Im going. We then introduced each other. Theyre Pat and Christ, both are 27 years old and still studying in university. We then decided to ride together for some kilometers since we were both heading in the same direction. One of them, Pat also used to visit Kuala Lumpur and he told me that he likes teh o ais limau. Hehe, suddenly I missed the moment when Im enjoying teh o ais limau in mamak shop with my friends back in KL when he said that. He also used to live 9 months in Bishkek, Kyrgyzstan and he was surprised to learn that I am married with a Kyrgyz that I met during my previous journey. Seems that this guy is really in love with Kyrgyzstan because while we were riding together, he kept on saying that this view really reminds him of Kyrgyz’s landscape. It is true, the landscape here in west of Iceland looks very much like mountains of Kyrgyzstan and even some parts of Tibet. 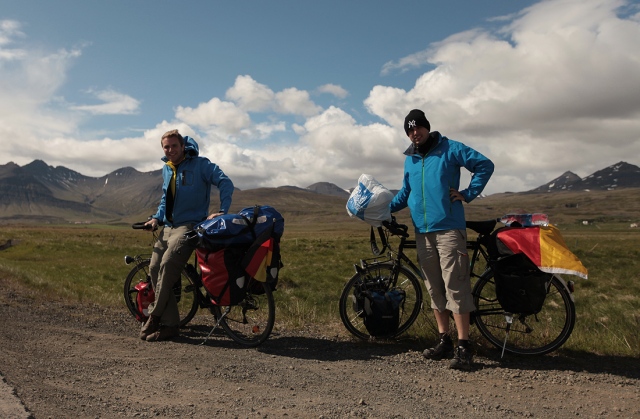 At some point, we split since they need to speed up to catch a football match where Germany will be playing against some other team in Euro 2012. They were carrying less luggage and they speed up towards the next accomodation to watch the match. I on the other hand, who dont really enjoy watching football were moving slowly. After a few hours, I reached the guesthouse that they were staying and pitched my tent near theirs in a campsite behind the guesthose. The other guy, Christ was into photography and has a photography studio in Germany together with his brother. Since we shared the same interest we were discussing many things on photography.

The next morning, we finally split since theyre heading to the end of the Snaefellsness peninsula and I was heading to Grundarfjordur, passing through a mountain. We exchanged contacts via Facebook so that we can still keep in touch. They will welcome me whenever I cycle in Germany passing by Berlin. Very nice and friendly German guys. We plan to meet again in some other town but somehow i doubt that, theyre moving fast since they have another week left in Iceland before going back to Germany and get to their studies, while Im on the other hand have around 9 more weeks here and I will be moving very slowly… like a sexy snail! 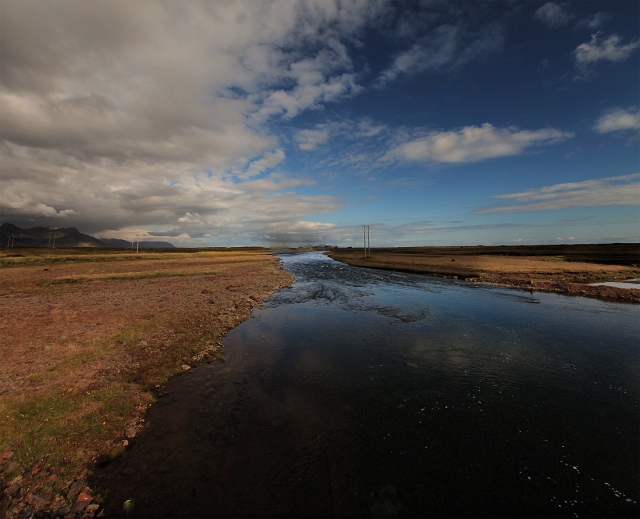 My ride towards Grundarfjordur was unexpectedly tough. I didnt know that I have to climbed a mountain pass that was really high!! I was really struggling getting to the mountain pass, it really reminds me of my ride in Tibet. It was tough that when I was near the top, I was pushing my bicycle…. again! Thehehehe….. When I reached the top, the view was really breathtaking, overlooking the fjords, waterfalls with the blue ocean at the far background, all under the blue sky! I was moving very slowly to get to the top, now I will be flying down to the other side of the mountain. But I didnt fly fast enough, the headwind really slowed me down and I had to pedal even when going downhill. Half way of going down, I saw a nice spot to camp. So I decided not to go to the next town, I wanna enjoy my time doing some wild camping in this very beautiful spot. There was a hill where the peak is covered with snow, the theres water flowing through it. The water is really fresh and I camped right next to it. Free water! Now I can cook, wash all my dishes, take super cold shower and do my laundy! :)

the ride to the mountain pass. this is the point where i started to pushed my bike to get to the top haha

I then pitched my tent there and enjoy the view with my dinner and coffee. It was really peaceful up here where I only hear the sound of water and birds. I stayed up till midnight to witness the Midnight Sun phenomena. But not long after that, the rain started pouring. I got inside my sleeping bag and shivering. It was really cold. I woke up the next morning and realized that the rain was still pouring. There was no blue sky at all, its cloudy everywhere, probably the whole of Iceland is raining.

At some point, at around 10 am, I just couldnt wait anymore and wrapped up everything and kept cycling in the rain. It was very cold until I started cycling and my body got warmed again. A few kilometers later, I got my first flat tyre! It was my first flat tyre in Iceland only after 300km of cycling. I was in the mountain and it was raining and very cloudy, so I slowly unpacked all my bags and changed the tube. But the ride after that towards Grundarfjordur was easy. It was downhill for around 10km then flatroad along the coast for the rest of the journey. I was riding under the rain for the whole ride but it doesnt really matter. The biggest problem is climbing steep roads and facing the harsh headwind.

the view of my hotel under the colors of the Midnight Sun!

← Into The West of Iceland
Leaving West Iceland… →

10 Comments on “Along The Snaefellsnes Peninsula”