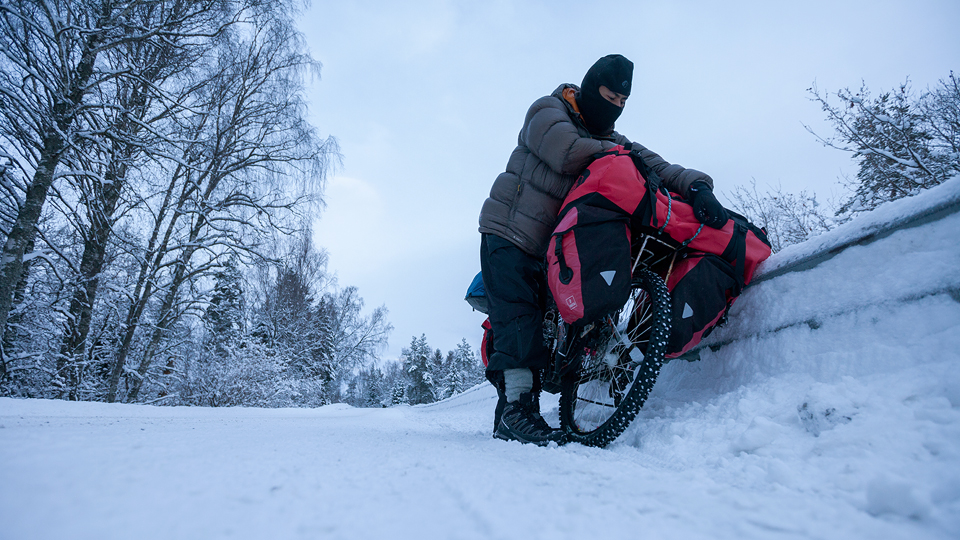 After everything was prepared, I flew to Stockholm, Sweden. I bought the cheapest ticket to Stockholm via London. So I had to transit for 9 hours in London! I don’t want to spend so much, and things are expensive in the airport. So for the whole day, I only ate 3 sandwiches and chocolate milk. I was so bored and started counting sheep. Then it was another some 3 hours of flight and I arrived Arlanda Airport in Stockholm in the middle of the night. It was dark and cold outside. I was really tired but I couldn’t start my ride. The currency exchange counter was already closed, I had to wait till morning to change my money into Swedish Krona. There was only 1 shop that was open in the airport that time, which was 7Eleven. I was shocked to see the price of the sandwich here cost roughly around 30 ringgit our money. It was just a simple sandwich! So I starved the whole night and didn’t sleep. I could battle with the cold, but I didn’t want to ride in the dark in the middle of a night. So I seek refuge in the airport, waiting till sunrise. I was bored and hungry for the whole night. So I assembled my bicycle slowly. 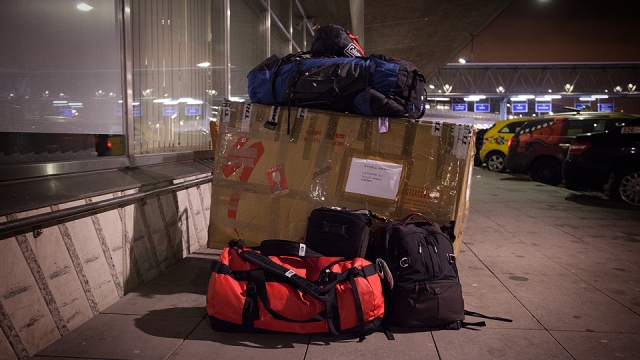 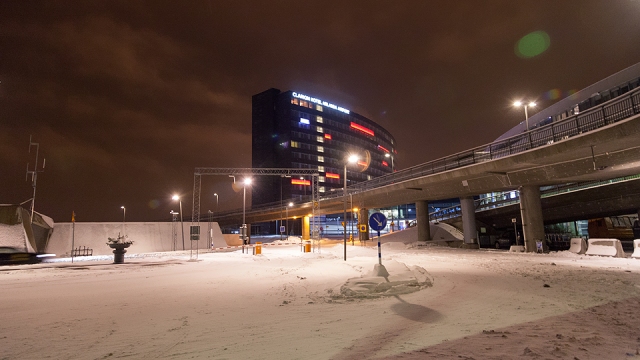 my first view of Sweden! from the airport…

Around 6.30 am, I was too hungry and I finally bought 2 snickers which cost roughly 15 ringgit! I had to use my British pounds and the exchange rate was really bad so I was losing more money there. While I was assembling my bicycle outside the airport, I realized that I lost the screw that attaches the front tyre on my bicycle! Taking a bus/cab was not an option for me. I have only 2 options, taking the risk and ride or walk! My destination was Uppsala, some 40km away. So what I did, I just substitute the screw with a tape! Hehehe. I had no other choice but to put my trust on the tape and started to ride. This is not the first time I gamble anyway. I used to make a rope by myself using tall grass in Iceland and use it to hold my broken rear rack! It was still quite dark but the first light was already visible. It was my first time riding with spiked tyres! It was very risky. I was hungry, lack of sleep and had to ride for over 40km without the screw that attaches the front tyre with my bike! The first 3-4 kilometers was really scary, heavy traffic right from the airport, I don’t have lights (since I never want to ride in the dark) and I’m not used to ride with spike tyres. It was really slippery and falling down is not a good idea riding in the busy road. If I fall down I might get hit by cars! So I was really careful for the first few kilometres until I found small road that leads to Uppsala.

now i will put this orange cycle to the test! can it survive in the thick snow?

finally, the small road towards Uppsala. quite and peaceful!

I felt better and safer once I hit the small road. Every few minutes I will check the front tyre. It still sits nicely on my bike. What a magic! I started to get used to ride with the spike tyres. It’s not too bad. Once in a while I feel that I’m more like sliding rather than cycling. Riding 40km from the airport to Uppsala feels like forever in the snow. The spiked tyres are heavy and I’m not used to it. The sun was getting higher and the Swedish landscape started to show its beauty. This supposed to be the easiest ride for me in the Scandinavia, its only a short 40km and the road is still good in southern part of Sweden. But I was struggling, battling against hunger, thirst, not enough sleep and my bike was having a problem. I passed by a few small neighbourhood in between and once I saw a man, I asked for help, where I desperately need water but sadly he didn’t speak English. So I kept going. I was riding extremely slow, it was flat and no headwind, but the snow was thick! After some 20km of ride, I took a rest in a small bus stop. I was too thirsty and for the first time, the snow at the roadside looks very delicious to me! I was thinking to grab some snow and put it inside my mouth, let it melt by the heat of my body to turn to water before I swallow it! But it was too cold and things could get worst if I do that. I was desperate of water but there were no one around. So after some 5 minutes of short break, I continued north towards Uppsala, which was another 20km to go. I had to push myself, the longer I delay… the more I get hungry. I finally reached Uppsala around 9.30 in the morning and I felt completely spent. 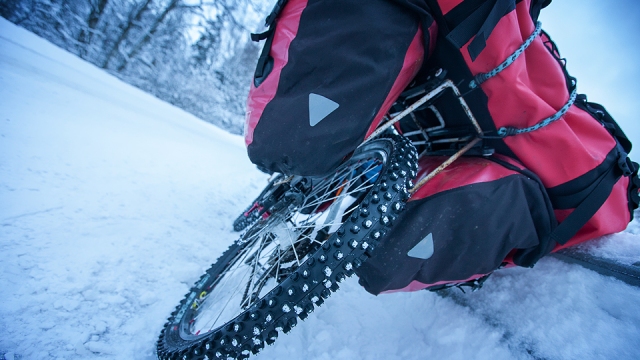 Ice Spiker Pro by Schwalbe… works like a charm so far… 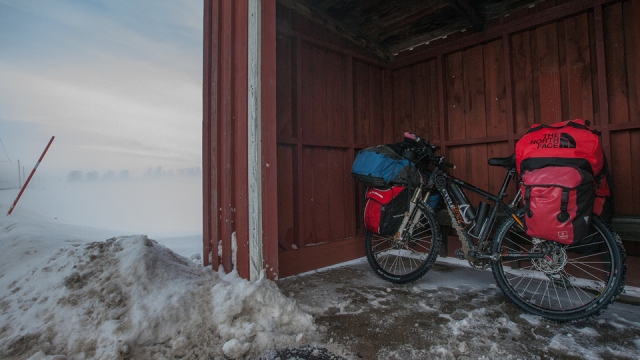 The first thing I had in mind when I reached Uppsala was to find money changer. I don’t have any Swedish krona with me so I couldnt get any food or drink. I only had some British pounds and Icelandic kronas. And finally, the front tyre went off! So I had to take off my bags, put it back in and assembled all my bags together again. After nearly half an hour of searching, I finally found a money changer, changed all of it into Swedish krona and bought myself a burger, fries and coke! Don’t ask me how much I spent for those! It’s extremely expensive here in Scandinavia! I really need to be careful on my spending here. After I feast the burger and the fries like a lion, I bought a Swedish simcard (again don’t ask me how much!!!) I called my Swedish friend, Jonas who was expecting me today. He was in a meeting in Stockholm and will be back only in the evening. So I waited in the city centre and roamed around.

clear gravel road for few km. but so foggy… 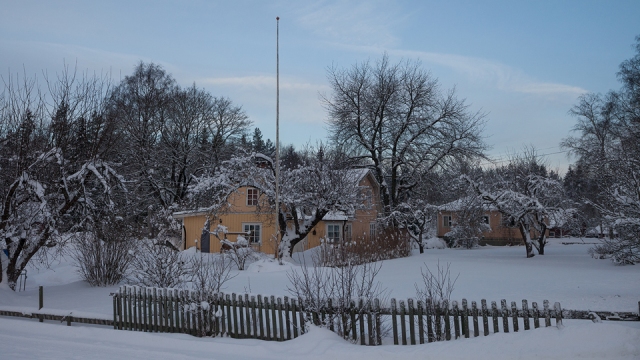 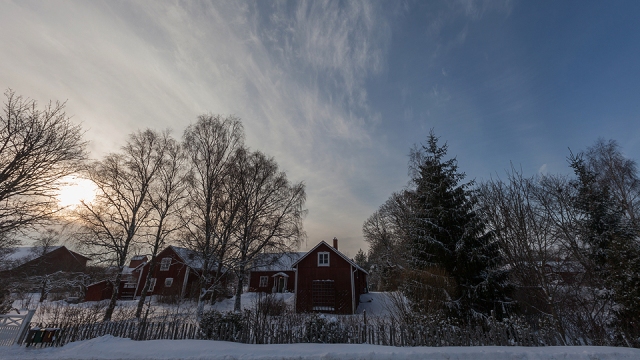 When I went to a small supermarket near Jonas house, there was a woman with 2 kids kept looking at me and my fully loaded bike. She finally came to me asking me where I came from and about my trip. She was fascinated to meet me and she is actually a rider too! She used to cycle from her home in Sweden all the way to India and back with her husband back in 2001! She mentioned to me about the hospitality of the locals along the way was awesome. And she promised herself, that if she meets a cyclist here in Sweden, she will definitely host them! So I was lucky I guess! And what a coincidence, after I told her that I’m riding around the world and filming a documentary about my travel, she told me that she is a photographer! We had quite a lot in common then. She lives only 25km north of Uppsala. So after I leave Uppsala, I will definitely meet her again in her town. She told me that her husband would love to meet me too! 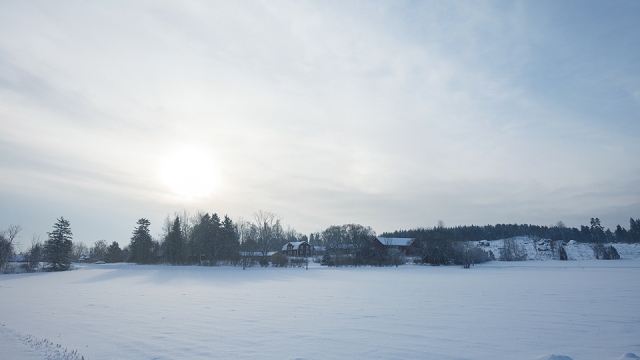 After hours of waiting, finally my friend Jonas came and met me in front of his house. I felt relieved and finally I could get some rest! It was good to meet this old friend of mine. We knew each other for 10 years now, from playing online game long time ago while I was still studying! He first came to Malaysia in 2004 to travel around the country and I let him to use my house as a base. Then he came again the following year with another 2 friends of his, again they stayed in my place. And the last time he visited me in Malaysia was a year ago, a few months before I left to Iceland. So we are no strangers. Now its me who will use his house as my base while I’m riding here in the Scandinavia. He also hosted his friend from Finland, Johanna who is here now visiting the country for 2 weeks. Johanna is Finnish but she speaks fluent Swedish. I was pleased to see my old picture hanging in the wall in his house together with his other traveling pictures around Southeast Asia. What a memory! It was a picture of me some 10 years ago! There is also another picture of Jonas with my whole family taken in front of my house 10 years ago hanging there on his wall. I guess he really loves Southeast Asia especially Malaysia. I even saw a picture of chicken tandoori with nan taken in a mamak shop in Sri Hartamas that we usually go.

thehehe. its me 10 years ago! I realized that the way i smile never change!

awww what a nostalgia! my family 10 years ago! and i saw this picture here in Sweden, thousands of miles away from home!!! 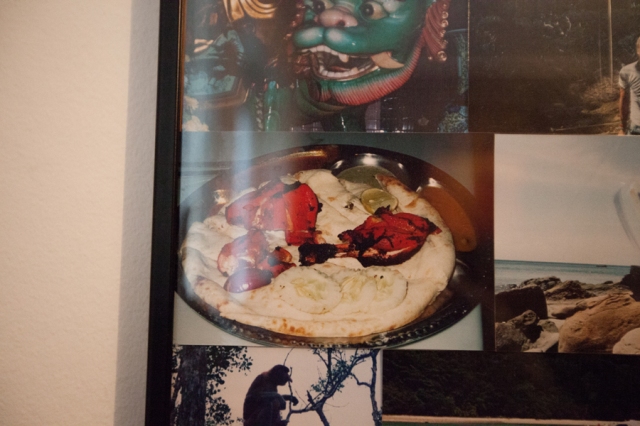 hehehe tandoori. our favourite back home. i think its in safiz, desa hartamas…. kot…

← Back To Europe
A Week With A Special Swedish Family →

9 Comments on “The Dark Winter Episode 1: The Journey Begins!”